Innovent (Scotland) Limited was established in 2005

Providing turnkey solutions for acoustic, ventilation and heating projects throughout Scotland and the UK

The Carrick on Loch Lomond

Innovents work at The Carrick on Loch Lomond and the latest Bluetongue project made the Business section of this weekends Sunday Herald in Scotland.
Excerpt as follows: “Glasgow -based Innovent (Scotland) Limited, founded by entrepreneur Bobby Motherwell, is also hoping to cash in on the scourge of Scotland.

A former ventilation engineer, Motherwell invented the Barrfly – alight, fabric-based ducting which creates an air curtain that cannot be penetrated by flying insects and can be fitted around outdoor structures, such as gazebos and covered patios. The device has been successfully installed at the Carrick Golf Club and Leisure Spa on the banks of Loch Lomond.

Helen Clarke, manager of the Claret Jug Restaurant at the Club, where the Barrfly has been installed, says: “Our guests can enjoy a glass of wine and the lovely views without being bothered.”

Motherwell extols the bottom line benefits that this protection affords: ” If this system allows pubs and hotels to keep serving outdoors for an extra four hours a day, the maths is very easy.”

Midges may be a nuisance to humans, but for livestock they can be deadly. There are hopes that the Midgeater and Barrfly technology that has proven effective in the tourism sector can be adapted to help to protect livestock across Scotland. Midges carry Bluetongue disease which kills sheep and occasionally cows. Texol and Innovent have already adapted their inventions to help relieve the threat to cattle. Nigel Miller, vice -president of NFU Scotland, said: “Combating bluetongue is our number one priority in light of the epidemic in Europe last year. This technology is an essential building block in ensuring we can control the disease.”

Miller explained that the Barrfly is being installed around farm buildings and midge-catching traps are helping to identify different kinds of midges, helping farmers to vaccinate efficiently and effectively” 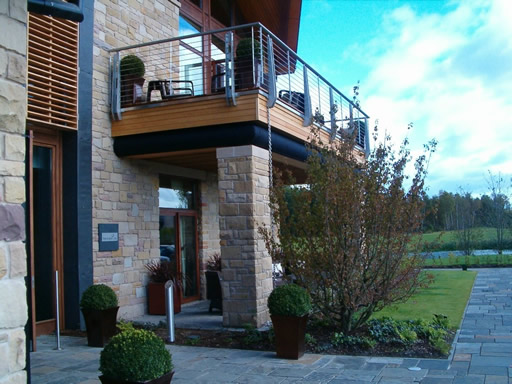 Innovent (Scotland) Limited completed the installation of their Barrfly midge barrier for the revolutionary project in providing vector proof housing to protect prize cattle from Bluetongue virus carried by vector midges. A collaboration with Genus ABS, Dr Alison Blackwell, Texol and Calor has resulted in the first project of its kind in Europe. With the project almost at completion, we are looking forward to evaluating the results which will be collated by Dr Blackwell and the staff at Genus ABS.

The picture shows the Innovent Barrly midge barrier installed at one of the openings in the “vector free” cattle housing.